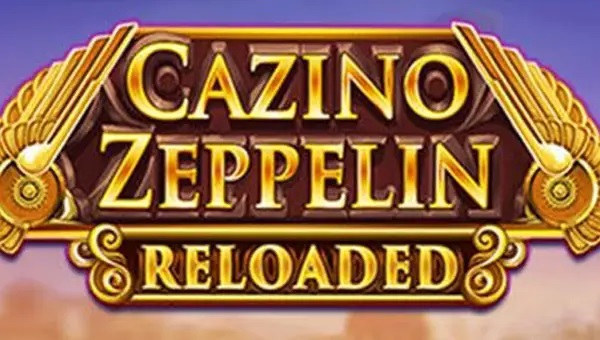 Cazino Zeppelin Reloaded is the follow-up to a slot machine released by Yggdrasil more than six years ago. In 2015, the original Cazino Zeppelin was released. Even today, the original appears like it might be a brand-new game, with great graphics and rewarding gameplay. The action will take place in the same zeppelin-themed casino, and some of the previous characters will return in the sequel.

Cazino Zeppelin Reloaded has the standard 5×3 reels as well as 20 active lines on which combinations can be formed. Use everything the slot has to offer, including the multipliers, and you could win a top jackpot of up to 200,000x your bet. It’s quite volatile, which can’t be prevented, but it does have a respectable RTP of 96 percent. Multiplier Wilds, scatters, and free spins with sticky multiplier wilds are among the game’s features.

The betting range is $0.20 to $20, and there are a dozen distinct values to choose from.

You can choose to spend an additional 25% to activate the Golden Bet, which doubles your chances of winning free spins. In this scenario, the range would be $0.25 to $25.

Cazino Zeppelin Reloaded is expected to pay out handsomely, but not to everyone. It’s highly volatile, with a top payout of 200,000x, which should entice any type of player. However, the added risk will likely keep only the most experienced gamers around.

You want to see that a game like this has reasonable odds for its players on average, if not for individual players. For a slot machine, 96 percent is sufficient.

The wild takes the form of a female Joker and is one of two feature symbols available in Cazino Zeppelin Reloaded. It appears to be the most powerful of the two. This is a multiplier wild that can increase wins by up to 5x when it substitutes for symbols in winning combinations during paid spins. The free spins, on the other hand, are even better.

The scatter symbol, the Free Spins logo and the golden zeppelin, is required to activate the free spins. You can win a modest prize worth 2x your stake if you get only two of these scatters. However, if you obtain three, four, or five, you’ll win 10, 15, or 20 free spins, accordingly.

The wild takes on even greater power here. To begin with, any wilds that were present on the reels on the triggering spin will remain in place during the free spins. All wilds become sticky as they land for this feature, and they can stack up over time. When a new wilderness enters this phase, the multiplier of all sticky wilds is increased by 1x.

If you land at least one wild on each of the five reels, you can retrigger this tremendous feature. This adds 5 more spins to your total, and it only happens once.

The design of Cazino Zeppelin Reloaded is similar to that of the first slot in the series, and the characters are even the same. It has a Steampunk aesthetic, with the action taking place on a zeppelin aboard a flying casino.

Its symbols begin with the same four card suit images and progress to four gamblers in premium positions. The scatter is the Free Spins logo, while the wild is the Joker Girl.

Cazino Zeppelin Reloaded is as entertaining as the original, with graphics that are quite comparable. When you consider the vastly better top prizes, it does feel like an improvement, and I believe you have every incentive to check it out.