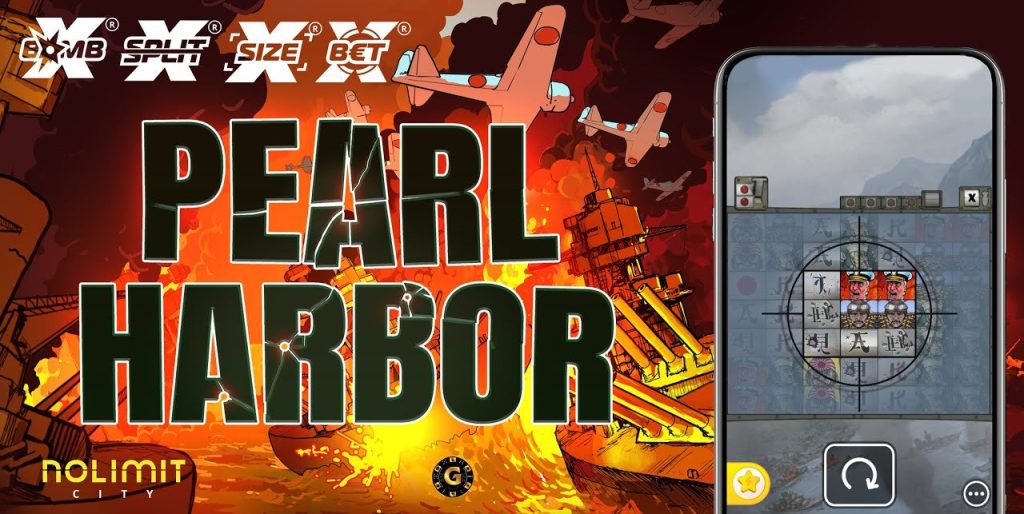 It appears that this new slot machine from Nolimit City was inspired by the battle of Pearl Harbor, one of the most significant events of the 20th century and the one that convinced the United States to join World War 2 against the Japanese. You may check out this game over the holidays since it’s one of their final releases for 2022.

Pearl Harbor features 7×7 reels and a Cluster Pays engine. Nolimit City features the customary great top jackpot and has a maximum payout of 41,127 times the initial bet. However, the volatility is at a very high level, thus you must make sure that the RTP is at 96.06%. It goes without saying that they introduced a tonne of fascinating features, such as xSplit, xBet Banzai, xBomb Wild Multipliers, xSize Dynamic Cluster Grid, Dogfights, and the Tora Tora Tora bonus.

Typically, bets are placed between $0.20 and $100. The sum doubles and might reach $200 when the xBet option is selected.

If there is one thing about Nolimit City you can rely on, it is that whenever they produce a new slot machine, they will add the largest top jackpots they can. Although Pearl Harbor uses a top jackpot of 41,127x, the game’s extreme volatility makes it one of those highly motivating ones.

There are three different RTP numbers, thus I advise you to use the 96.06% variant.

Feature of the game Pearl Harbor

Although there are a total of 7×7 reels accessible, you only start with 3×3 spots, and the rest of the playing field is blocked. You need five or more symbols arranged in a cluster where they intersect horizontally or vertically to win. When they group together, they are destroyed, and elements like the xBomb, Colossal Symbols, or Targets cause the playing field to enlarge.

By detonating, the xBomb Wild Multiplier will destroy up to 10 surrounding symbols. When it does this, the active area may move or grow. Additionally, it can divide and offer multipliers.

The Target is a wild symbol that enlarges the playing field before acting as a substitute.

The well-known xSplit mechanic is in use and will appear as a sword. Which symbols will divide depends on which way the blade is pointed.

The Dogfight, the game’s main feature, comprises of three spins with the possibility of multipliers. Every time a new multiplier appears, the number of spins is reset. This is one of the more entertaining aspects of the game, along with Dogfight and Kamikaze Attacks, and of course there is also a chance to win a lot of money. You can also purchase a Tora! Tora! Tora! Feature.

The artwork for Pearl Harbor are themed on the Japanese attack on the US naval base, and it appears that the emblems span from royals dressed in Japanese garb to pictures of the fighter pilots and sailors that took part. Although it has a style that leans more toward the Japanese than the US side, it still looks fantastic.

Overall, I found Nolimit City’s Pearl Harbor free slot to be quite sophisticated and enjoyable, which is the company’s standard design approach when creating slot machines.